All presentations are stream live on our youtube channel and  indexed on this site. 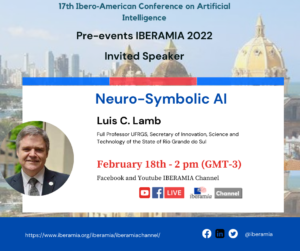 Luis C. Lamb is a Full Professor and Secretary of Innovation, Science and Technology of the State of Rio Grande do Sul, Brazil. He was formerly Vice President for Research (2016-2018) and Dean of the Institute of Informatics (2011-2016) at the Federal University of Rio Grande do Sul (UFRGS), Brazil. He holds both the Ph.D. in Computer Science from Imperial College London (2000) and the Diploma of the Imperial College, MSc by research (1995) and BSc in Computer Science (1992) from UFRGS, Brazil. His research interests include neural-symbolic computing, the integration of learning and reasoning, and ethics in AI.

Next Presentations (as pre-events IBERAMIA 2022)